Napoleon Reef: what’s in a name?

Nestled at the foot of Mt Ovens to the east of Bathurst, Napoleon Reef is a peaceful cluster of rural residential blocks and small farms.  An almost forgotten part of Bathurst’s pioneering and mining history, the area has been known by a number of names over the years: descriptive names that have been lost through geographical naming, the formal rural addressing system and the passage of time.  With the establishment of the colonial settlement of Bathurst in 1815, land ownership across the Bathurst Plains to the east of the Macquarie River was carefully managed by the governors.  The first blocks were granted to Macquarie’s ten settlers in 1818 and subsequent grants were made during the 1820’s.  However, it wasn’t until Mitchell’s new road from Sydney descended onto the plains at Brown’s Hill in 1830 that the higher ground towards the mountains began to see significant settlement.  The area was known to the local Wiradyuri people as ‘walang”, meaning stony ground, an apt description of the land which was also reflected in the naming of The Stony Range around what is now known as Mt Boyd.

Andrew Livingstone was granted 100 acres of land at the foot of The Stony Range alongside Green Swamp Creek in 1831.  He built a substantial early colonial brick house and opened it as The Green Man Inn at Green Swamp in June 1834.  The inn, which offered hospitality to travellers along the Sydney Road until at least 1858, was operated by various licensees under several names including the Green Swamp Inn and New Inn.  In November 1839 English naturalist Louisa Meredith stopped briefly at the inn, then run by Lachlan MacKay, describing it as “a tidy public-house, which, although the fair hostess is believed to suffer from the prevailing thirst after strong drinks, we found very neat and clean; the miniature apartments set forth with bright Birmingham tea-trays, conch-shells, and the beautiful tail of the lyre pheasant, whilst the whitewashed walls and dimity curtains preserved their purity most surprisingly in this fly-tormented country”.

In March 1844 Scotsman Andrew Little paid £5 for a section of land further down the creek which he initially referred to as Green Swamp Station.  He employed Ambrose Mitchell to oversee the property equipping him with a bucket, frying-pan, axe and a fortnight’s rations of flour, mutton, tea, sugar etc.  Regular supplies and payments were sent until April 1845 when Andrew moved to Green Swamp with his wife Elizabeth and three young children, John, George and Harriet. Upon taking up residence they named the property Bimbenang, a Wiradyuri word meaning marshy ground.  In addition to raising sheep the Little family established the Bimbenang Nursery in 1857.  The nursery, which operated for over 50 years, was well-known throughout the district for its variety of fruit trees, ornamental trees, shrubs, plants and flowers.  Fruit grown at the nursery regularly won prizes at the Bathurst Show.

During the 1850’s a village to be known as Green Swamp was surveyed: a series of one and two acre lots along both sides of the creek close to Bimbenang.  The reason for this village plan is unclear but it could have been in response to the establishment of the Green Swamp Copper Mine which was operating prior to 1851 when a specimen from the lode was reported to have been exhibited at the Crystal Palace Exhibition that year.  The location of the surveyed village may have been significant due to the relatively close proximity to Bathurst or to the road linking the Sydney Road to Wattle Flat and the Turon goldfields.  Regardless of the reason the proposed village did not eventuate although many of the lots were taken up by miners under miner’s rights.  About 1855 George Roper and family purchased three lots and established the Littleton orchard specialising in apples, pears and plums.  For some years the village area was referred to as Littleton.

In August 1856 gold was discovered in the creek behind the Green Swamp Inn and shortly after 40      miners were working in the creek close to Bimbenang.  Alluvial mining in the creek areas was pursued for several years until October 1863 when Pierrre Pourot found a reef, which he named the Napoleon Reef, on the hillside above the Green Swamp village.  Mining began in earnest with many shafts being dug along about 300metres of the main reef and by 1866 there was a population of about 150.  Many miners settled along Green Swamp Creek and what was to have been known as Green Swamp gradually took on the name of the reef, Napoleon Reef.  Mining continued on a small scale for many years culminating in a short-lived commercial venture by Greater Lucknow Consols Limited in 1911.  The old diggings have often been reworked over the years by individuals especially during the Great Depression when many camped out near the old workings.

To meet the needs of a growing population a provisional school was established at Green Swamp in August 1873 in a building provided by Mr Christopher Roberts of the Green Swamp Inn.  In 1876 local residents applied for the establishment of a public school, indicating that 59 children between 4 and 14 would be able to attend and an additional 14 people over the age of 15 were keen to attend Evening School.  In September 1878 the provisional school was converted to a public school known as Walang Public School, a new brick school building with teacher’s residence was erected and Mrs Eliza Boyd of Yetholme was appointed as the first teacher.  The school quickly became the focus of the community and the surrounding area became known as Walang although the name Green Swamp was still being used into the 1920’s.

In 1983 Evans Shire Council developed a rural residential subdivision adjacent to the old highway at Walang, referring to the location not as Walang but as Napoleon Reef, the name by which the areas formerly known as Green Swamp, Napoleon Reef and Walang are now generally known. 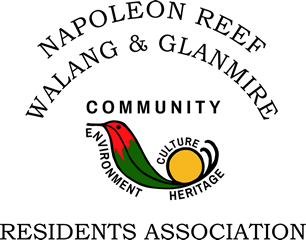 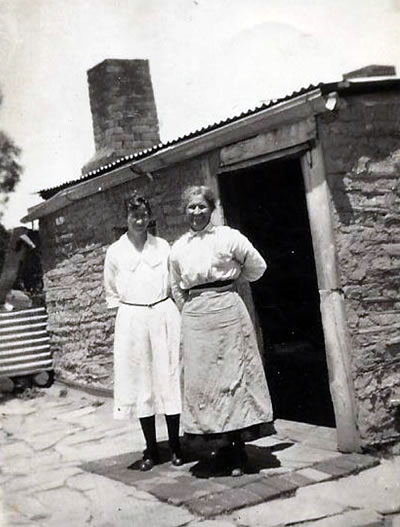 Mrs Charles Edwards and daughter Charlotte outside their Napoleon Reef home about 1916.  The wattle and daub miner’s cottage was built c.1860.